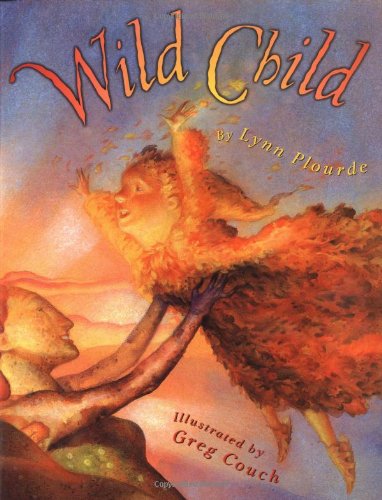 The bouncing, methodical rhyme scheme that served Plourde well in her humorous Pig in the Mud in the Middle of the Rud and her recent Moose, of Course! works against the theme in this bedtime book. As Mother Earth repeatedly tries to put her daughter to sleep, she's met with the same reply, "" `Not for a while,' said her wild child,"" who comes up with a variety of stalling tactics, including a song, a snack and, of course, a kiss goodnight. Each spread offers a number of clues as to the wild child's identity, most of which are smoothly integrated into Couch's (Moonball) artwork. While he keeps the girl visibly human in face and stature, fall leaves make up her hair; and hills, streams and stones comprise Mother Earth's beautifully sensuous lines and curves as she gives her daughter the gifts of the season (e.g., a snack of ""Crunchy, munchy,/ chewy chestnuts./ Plumpy, lumpy,/ pulpy pumpkins""). His subtle brushwork and golden palette convey a dusk slowly metamorphosing to nightfall. Unfortunately, the jarring closing lines, which describe the mother's kiss, end the book on an eerie note: ""A gusty, blustery, twisty embrace./ A crystalish, icicle-ish,/ icebergy kiss."" Couch's artwork, showing Mother Earth tucking the girl (revealed to be Autumn) into bed, softens the imagery, but readers may well be put off by the cool language for a ritual usually characterized by warmth. Ages 3-8. (Sept.)
close
Details