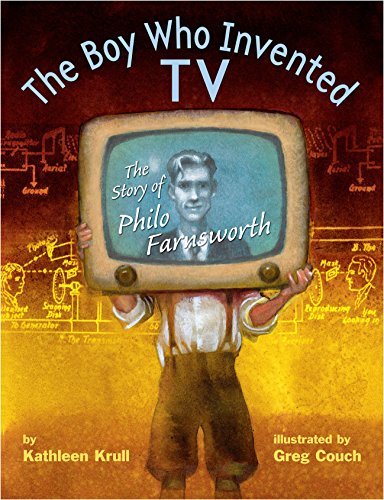 The Boy Who Invented TV: The Story of Philo Farnsworth

This entertaining book explores the life of inventor Philo Farnsworth, who discovered how to transmit images electronically, leading to the first television. Farnsworth’s early days are spent studying science magazines and dreaming about the applications of electricity. Later, Farnsworth persuades investors to fund his efforts, which, with the assistance of his wife, Pem, result in the first, primitive “electronic television” in 1927 (incidentally, Pem became the first person ever to be televised). Krull’s substantial, captivating text is balanced by Couch’s warm, mixed-media illustrations. His muted tones suggest the grainy light of early TV screens and bring home the message about curiosity and perseverance. Ages 5–8.