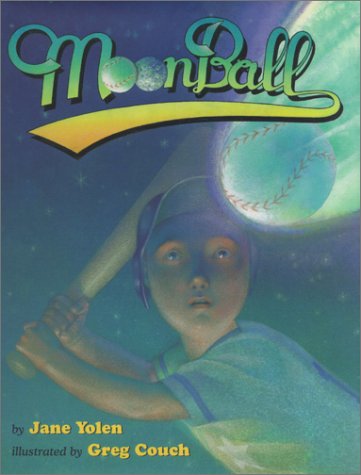 Called the ""Hitless Wonder"" and ""Danny the Whiffer"" by his teammates, Danny retreats to bed after another dispiriting round of strikeouts, ""watching the moon round the bases of the sky"" and wishing that he could hit the ball ""just once."" In a fantasy sequence, he floats out the window and joins the constellations (the ""All-Stars"") in a game against the moon and planets (the ""Orbits""), where concentration and determination finally come together for him with a stellar home run. Yolen creates a hybrid of poetry and baseball in her fantasy tale. Her opening image of the moon ""hanging over the field like a pop fly"" prepares the way for Moon's later appearance as pitcher in the celestial game, carrying on the taunts of Danny's opposing teammates ("" `No-hitter,' sneered Moon""). Under Couch's (First Palm Trees) skilled brush, these metaphors materialize, evincing characters with wit and flourish--especially the beefy Orbits, whose round bodies topped by tiny heads give them a humorously menacing look. The moon is the pitcher every player fears--with his small, piggish eyes and bulbous nose, his face a stylized amalgam of curves and planes, he is the very embodiment of mean-spiritedness. Yet the palette maintains a tranquil atmosphere: vivid turquoises seep into restful layers of seafoam green and inky blue, and flashes of vibrant oranges and reds glow hotly against the cooler shades, like fire against ice. The artist's use of light is particularly effective, and the dream sequences have an eerie radiance, as if lit by reflected moon- or starlight. Ages 4-8. (Mar.)
close
Details