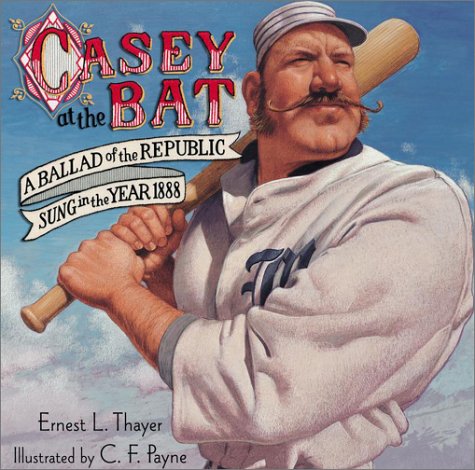 CASEY AT THE BAT: A Ballad to the Republic Sung in the Year 1888

"The outlook wasn't brilliant for the Mudville nine that day"—but it certainly is for this robustly entertaining picture book, as Payne () takes a swing at Thayer's beloved poem and knocks it out of the park. The tale of infield pomp and ignominy seems made-to-measure for Payne's statuesque characters, with their outsize noses and ears and florid faces. Standing head and broad shoulders above them all is the "mighty" (if overconfident) Casey; with his impressive porkchop sideburns and handlebar moustache, he looks every inch the Victorian gentleman-athlete. Payne injects a number of droll touches: a small inset of a gravestone enscribed "R.I.P. Cooney" accompanies the phrase "when Cooney died at first," for instance, while "defiance gleamed in Casey's eye, a sneer curled Casey's lip" occasions a batter's-eye view of a skinny and clearly terrified pitcher. For an ingenious take on Casey's approach to his at-bat ("Then from 5,000 throats and more there rose a lusty yell;/ It rumbled through the valley, it rattled in the dell"), Payne shows a spread of Mudville, and a farmer and his son listening to the uproar from where they are working on the mountainside. Entirely different in approach from Christopher Bing's starmaking turn with the same material, Payne's equally enjoyable outing is just the ticket for a front-row seat at literature's most famous ballgame. An afterword explains the poem's origin and history. Ages 4-8.