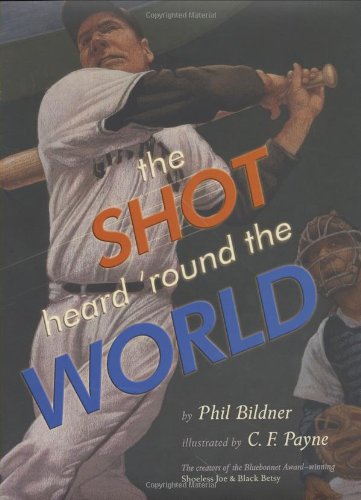 THE SHOT HEARD 'ROUND THE WORLD

The title of Bildner and Payne's latest collaboration ( ) refers not to the beginning of the Revolutionary War, but rather to the end of the Dodgers' 1951 run for the pennant. Affectionately calling the team "Dem Bums" and Ebbets Field, where they played, "Brooklyn's cathedral," the boy narrator sets the scene, then explains that all three New York teams were in a race to the World Series that summer. The Yankees had already secured their place, and on October 3, 1951, all of Brooklyn was holding its breath to see whether the Dodgers or the Giants would win the final game of the "best of three" tiebreaker to face the Yankees in the Series: "Up on Pitkin Avenue in Brownsville, the rabbis recited special hymns and prayers, and down at Lundy's in Sheepshead Bay, the fussy old ladies, forever complainin' about their flounder and snapper, put a fork in their whinin'." Payne's mixed-media paintings take on Norman Rockwell–like qualities as he portrays cheering teenagers gathered around radios and a glimmering Ebbets Field; it's as if readers view the scenes through a soft-focus lens or the haze of distant but treasured memories. Just as effective are his portraits of the Dodgers' Jackie Robinson sliding into first, and the Giants' Bobby Thomson, who, with the crack of his bat, signals the end of the Dodgers' season. This author-artist team ably captures a moment in sports and cultural history that will have certain appeal for sports fans across generations. Ages 5-8.