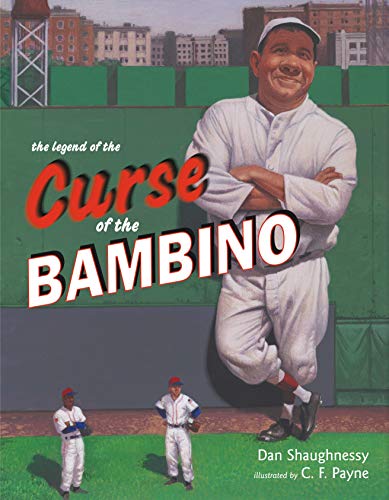 THE LEGEND OF THE CURSE OF THE BAMBINO

Shaughnessy, author of the adult title and credited with coining the phrase, explores the origins of the alleged curse that kept the Boston Red Sox from winning the World Series for 86 years. "Dad, who was the greatest ballplayer who ever lived?" asks Kate, as she and her father head to the opening game against the New York Yankees at Fenway Park. "That's easy, Kate... It was George Herman Ruth." Payne ( , reviewed above) portrays a ghostlike image of Babe Ruth looming over the stadium. The father continues, "Once the Babe left Boston, the Red Sox didn't win again for more than eighty years." The father then fills Kate in with details of Ruth's contributions to the 1918 Series against the Cubs, which put the Sox up three to one in the Series they ultimately won. A pleasing tall-tale quality pervades the book once Ruth is traded to the Yankees, ushering in decades of losses for Boston. The artist comically depicts the Babe tripping up his former teammates—holding onto shortstop Pesky in 1946 in St. Louis and kicking a ball between first baseman Bill Buckner's legs in New York in 1986. The final spread shows Boston's celebration of a curse-breaking victory: "But then came the magical season of 2004, when the Red Sox beat the Yankees, won the World Series, and lifted the Curse of the Bambino forever." Dad tells Kate he never did believe in the curse: "I don't think the Babe would have ever done something like that." Nevertheless, the famous hex occasions some mighty witty depictions of the Babe thwarting his former team. Ages 5-8.