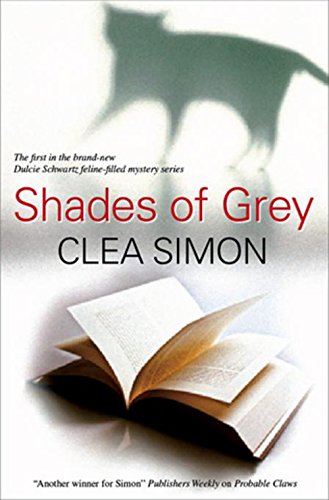 Simon's tepid brew of cat paranormal and academic chick lit, the first of a new series, may disappoint fans of her Theda Krakow mysteries ( , etc.). Dulcie Schwartz, a 26-year-old Harvard doctoral candidate living in Cambridge, Mass., mourns the death of her beloved cat, Mr. Grey. She's also worried about keeping her temp job until September's grant money kicks in. Nothing, however, prepares her for the stabbing death of her roommate, Tim Worthington, not even hearing the eerie warning of Mr. Grey's ghost before finding Tim: “I wouldn't go in, if I were you.” Tim, a playboy who enjoyed partying more than studying, had a bit of a drug problem that could be related to his murder. While Dulcie is a likable enough heroine, some may feel she should focus more on crime-solving than her thesis and dating. Others will hope to see more of Mr. Grey, whose ghostly manifestations are relatively few, in subsequent outings.