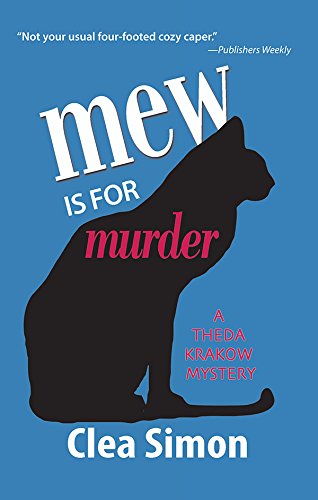 Mew Is for Murder

Journalist Simon ( ) makes an auspicious fiction debut with a well-plotted cat mystery that's not your usual four-footed cozy caper. Theda Krakow, an appealing freelance feature writer, really gets down to "kickin' " blues and the Boston rock scene. When Theda goes to interview "cat lady" Lillian Helmhold at home in Cambridge, she finds Lillian dead and her cats circling the woman's big Victorian house in distress. Lillian's death appears to be an accident, but someone keeps breaking into her house, which is rumored to contain treasure in the late owner's stacks of boxes and papers. Suspects include a coffee-bar waitress who helped Lillian with the cats, Lillian's schizophrenic son and an avaricious realtor who lives next door and hates cats. Simon writes well about the visceral tug of today's rock music. We feel the feral heart of true hard rock, and the way the sound, the dancing and the booze all blend into something close to good sex. If the ending borders on the saccharine, and a cat named "Aslan" who saves the day is a little much, this is still a strong start to what one hopes will be a long series.