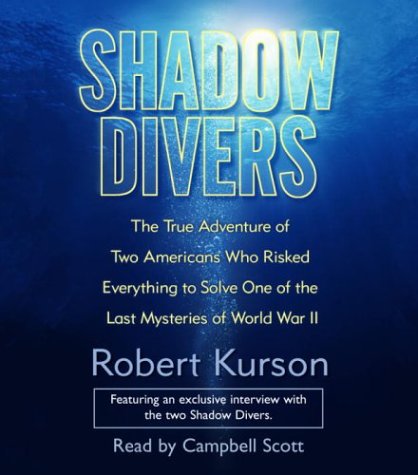 SHADOW DIVERS: The True Adventure of Two Americans Who Risked Everything to Solve One of the Last Mysteries of World War II

Kurson's chronicle of an extraordinary deep-sea discovery makes for a captivating audio experience. In 1991, divers John Chatterton and Rich Kohler came across the buried remains of a German submarine just off the coast of New Jersey. Unable to identify the ship and mystified as to its origins, the two men became obsessed with learning where the U-boat came from and what brought it to the bottom of the sea. Although the story's set-up, which comprises most of the first disc, drags, the pace picks up when the partners begin traveling the world, digging up clues. Reader Scott uses character voices but keeps them subdued, even when dealing with the salty language of the seamen. This is a wise move, since there's plenty of drama inherent in the text; lengthy and detailed passages describing deep-water dives, and the horrible things that can go wrong with them, evoke mental pictures that are atmospheric and downright claustrophobic at times. A segment featuring interviews with Chatterton and Kohler rounds out this satisfying audio edition.