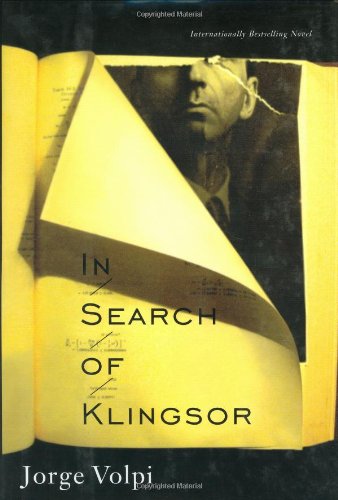 IN SEARCH OF KLINGSOR

Broad in scope and supremely ambitious, this novel (the first in a projected trilogy) by Mexican writer Volpi succeeds at several levels—as a thriller about a U.S. military officer seeking to ferret out the identity of the scientist who directed Nazi research during WWII, as a scientific search for truth by a physicist who encounters Einstein, Von Neumann, Schrödinger, Neils Bohr and other great minds of the 20th century and as a literary novel about a moral quest to destroy an evil that dates back to ancient German folklore. The framework for the novel is a scientific duel between Francis Bacon, the young American physicist who draws the assignment of trying to track down "Klingsor," the mysterious, diabolical head of Nazi research, and Gustav Links, a German physicist who worked on the Nazi atomic team and who agrees to help Bacon. Bacon balks at being assigned to Germany in the postwar years, but when he locates Links he embarks on a fascinating scientific journey that involves realistic and compelling meetings with the likes of Heisenberg, Gödel and Schrödinger. Heisenberg is the most promising suspect, but Bacon begins to doubt the physicist's guilt when he becomes involved with a German woman named Irene who begins to insist that Links is the culprit. Volpi's impeccable, extensive research provides the fuel for much of his taut prose, but he also mixes in plenty of poetic passages about the nature of physics, observation and discovery. The guessing game as to Klingsor's true identity provides considerable suspense, and Volpi adds resonance and moral weight by reaching back into German folklore. In an era in which science has become the primary vehicle for moving society forward, Volpi offers a poignant, powerful reminder of the potential and the peril involved when we harness the forces of nature.