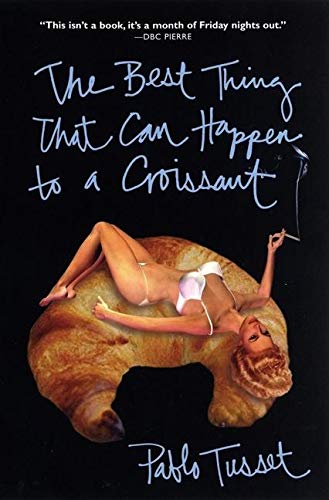 The Best Thing That Can Happen to a Croissant

Despite a contrived plot and frequent rhetorical indulgences (the author never met a dream sequence he didn't like), Tusset's debut, a bestseller in Europe, still manages to be engaging and occasionally even uproarious. The novel follows the exploits of Pablo Miralles, heir to the Miralles family fortune, as he gets swept up (between naps, drinks and trips to brothels) in a convoluted plan to find his older brother, Sebastian, who has mysteriously disappeared. Unlike the über-hardworking, spit-and-polished Sebastian, Pablo is content to cash his inheritance checks, smoke joints and entertain himself, when not watching TV, by working out a theory of "Invented Reality" online. The plot ambles along as Pablo tries harder to empty Sebastian's bank account than he does to find him. The explanations Pablo offers for not involving the police must simply be accepted, as must the ending, wherein Tusset tries to wrap up the plot in two chapters involving a turgid chase sequence and some ponderous exposition. But the book is a pleasure precisely because it so brazenly sloughs off responsibilities to pacing, plot or emotional resonance. Rarely has such a winning story been built out of such a paean to the joys of slackerdom.