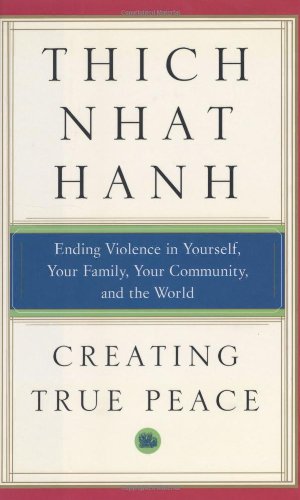 CREATING TRUE PEACE: Ending Violence in Yourself, Your Family, Your Community, and the World

If Vietnamese Zen monk and peace activist Nhat Hanh has said the same thing over and over again, it's because his message can't be restated too often in a violent world: peace can be found in every step, every breath. Nhat Hanh's books, many of which are transcriptions of talks, have ranged widely, from poetry to Buddhist commentaries to reflections on Jesus. This newest is filled with meditations and practices for individuals and families; since relatively few people choose monasticism as a lifestyle, the practice of household peace through deep listening and loving speech is eminently useable. Moreover, as Nhat Hanh shows in his stories and examples of working with people in conflict, such techniques underlie peace in the political arena as well. Like the Dalai Lama, Nhat Hanh possesses an extraordinary ability to speak simply about complex Buddhist teachings such as the true, transient nature of existence and how to act mindfully and compassionately in light of that view. His simplicity goes hand in hand with a challenging austerity, counseling against the consumption of things that lead to unmindfulness, like alcohol or "toxic" media products that feed inner "seeds," or tendencies, toward violence. Written in Nhat Hanh's characteristically soothing way, this is a practical and basic book of his profound and comprehensive teachings, especially for families with children.