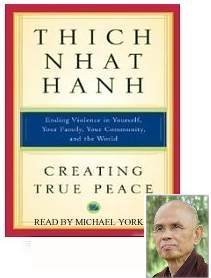 CREATING TRUE PEACE: Ending Violence in Yourself, Your Family, Your Community and the World

In narrating Nhat Hanh's spiritual guide, York did not have an easy task. The text is an accessible, solid introduction to Buddhist principles. Since Nhat Hanh is committed to what he calls "engaged Buddhism," he takes basic Buddhist practices (mindful breathing and walking meditation) and shows how they can transform not only a soul, but a family and even a nation. But can a narrator find drama in a series of meditation instructions? York does. While there is very serious drama in the text at times—Nhat Hanh was a young monk in Vietnam in the 1950s and '60s and brought his faith and his work with refugees right up to the front lines—this is a book of reflections, and York manages to find the poignancy in these reflections. Indeed, York's reading stays so close to the spirit of the text that listeners can practically hear the inflection of the monk himself. His voice is soothing, yet never hypnotic—a great match for a work that urges its listeners to wake up to their true natures.