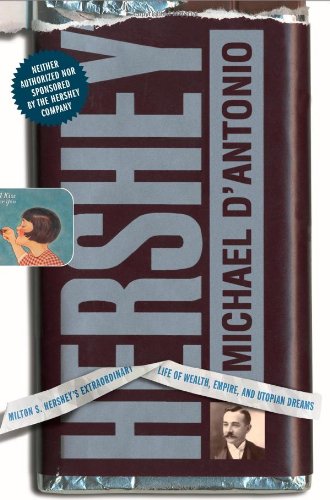 Keeping his prose blessedly free of "sweet" wordplay, D'Antonio offers a balanced and genial look at the man who brought America the five-cent chocolate bar and founded a utopian village. Milton S. Hershey (1857–1945) was hardly the only Progressive-era tycoon to envision an idyllic company town, but he alone made it work. He set out to create "a self-perpetuating little utopia of capitalism and charity," and that's exactly what Hershey, Pa., was and is. D'Antonio ( , etc.) describes his subject's childhood and early failures, the company's investments and dealings, and the intricacies of candy making. He includes bad stuff on Hershey: the egotism expected of a business mogul, some capricious firings, a tendency toward heavy-handed paternalism and a childless marriage to a woman who, the author concludes, suffered from and died of syphilis. He also explains why Hershey's astonishing generosity toward a school for underprivileged boys resulted in decades of corporate stagnation and, in the last few years, a bitter battle over the company's future. All in all, D'Antonio solidifies his subject's reputation as "a kindly type of industrialist" who brought the nation "happiness in a wrapper." Not a massive social history with grand pretensions—indeed, it's a relief to pick up a corporate titan's biography that weighs less than eight pounds—this volume will satisfy all but the most voracious readers.