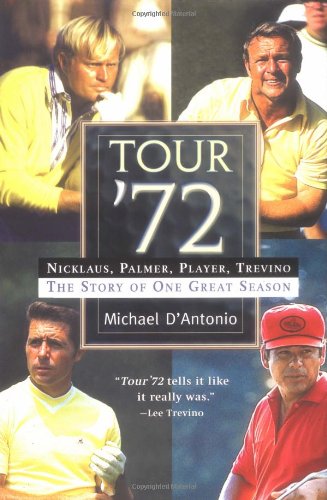 Featuring crowded leader boards, surprise turnarounds and sudden-death playoffs in five of its first seven tournaments, the 1972 PGA Tour was earmarked by a fierce rivalry among the players not witnessed since. Focusing on Nicklaus, Palmer, Player and Trevino, D'Antonio () traces the character of the season and its hopefuls as they vie with one another for the greatest crown in the sport—the winning of the four major tournaments of the PGA Tour. As D'Antonio moves swiftly among the games at Augusta National, the heartbreaking Muirfield in Scotland for the British Open and Michigan's Oakland Hills, he captures the enormous drives, the startling putts and every fade, bogey, slice and dispiriting hack shot from the rough. The author's sense of drama and storytelling raises the stakes at every turn, making this tale an unexpectedly engaging read. D'Antonio also performs a deft balancing act, situating a stodgy, stuffy sport amid the violent cultural upheavals of the 1970s. The results are not always dynamic, yet his narrative is a remarkably fresh story and will appeal across the board to the millions of golfers.