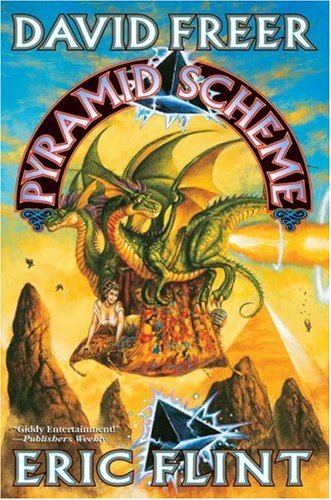 In this SF-fantasy romp through classical myth, the authors of offer a charmingly picaresque journey that begins when an artifact of the alien Krim lands in the University of Chicago library and starts abducting people. Few of the artifact's victims return alive, and some do not return at all. Among those abducted into a Krim-twisted version of the ancient Mediterranean world are street-smart university custodian Lamont Jackson, biologist Elizabeth De Beer, paratrooper sergeant Anibal Cruz and, most crucially, mythological scholar Jerry Lukacs. Weedy and absent-minded, Lukacs is the only one who can advise the exiles on how to outwit Odysseus (who has the ethics of a junk-bond dealer) or win the good will of Medea (much maligned, but accompanied by two dragons who need a to eat). Assembling allies from different mythologies as they go along, the exiles must strive to undo the Krim's corruption of the Olympians before they can hope to effect a return to their own world. The novel is full of historical, mythological and folkloric erudition, as well as wit (usually laced with puns), coincidences, broadly painted characters and a vast profusion of the verbal equivalent of sight gags. Since the individual parts are sufficiently entertaining, the reader won't worry much about the whole's lack of integrity.