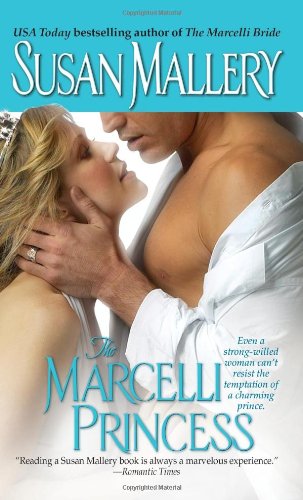 The finale of Mallery's Marcelli family series (after ) is a charming but exasperating misfire. Mia Marcelli is shocked to wake up in her California home next to the father of her four-year-old son, a man she believed had been killed. It turns out that he's not the thief she thought he was, but rather Crown Prince Rafael of Calandria. She doesn't yet know it, but he's come to claim his love child and heir—and once his son is on Calandrian soil, Mia will have no legal rights to him. Rather then deal honestly with Mia, Rafael schemes to get his son before the truth is revealed, giving him all the more work to do when the time comes to redeem himself. Most of the previously introduced Marcelli clan return in this book, but Mia and her family are its best part. The sexist, duty-bound Rafael is a one-note brooder who doesn't do much to win over the reader, despite some humor and strong chemistry between the leads. Mia's unlikely history as a secret agent and the "disguised prince's secret baby" premise may require more suspension of disbelief than readers can spare, though series fans will find much to enjoy in the family dynamics.