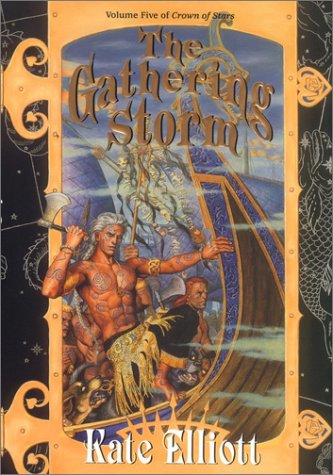 THE GATHERING STORM: Volume Five of Crown of Stars

Lovers of big, complex fantasy novels will welcome Elliott's fifth entry in her Crown of Stars saga (after 2000's ), set in a world with a strong flavor of the Holy Roman Empire. Liath, one of the Ashioi, a subrace of humans with magical powers, returns after four years of exile to find that her husband, Prince Sanglant, is trying to ally with the griffins to save the Ashioi from his diabolically possessed father, Emperor Henry. Liath and Sanglant's daughter, Blessing, is in danger as well. Borrowing from medieval history, Elliott fills her story with characters, institutions, spells, strange creatures, fascinating religious practices and still more characters (until a list of them is direly needed). The considerable similarities to Katherine Kurtz's Dernyi series should attract Kurtz fans.