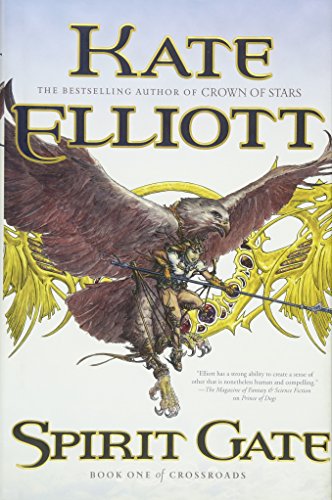 Spirit Gate: Book One of Crossroads

Elliott's elaborate first entry in a projected seven-book fantasy series introduces a once prosperous but now lawless land called the Hundred. Its godlike Guardians, who dispense justice, have disappeared; the eagle-riding Reeves, who have kept the peace, have lost authority; and a mysterious, ruthless new force preys on the towns and inhabitants of the Hundred and neighboring empires. But after years of dissolute behavior, a Reeve named Joss is regaining his will to defend his land. Meanwhile, Outlanders Captain Anji; his resourceful bride, Mai; and his well-trained band of Qin soldiers come to the Hundred by necessity. Elliott ( ) crafts complex if not wholly original characters, including strong women who persevere in repressive, nonegalitarian societies. She is equally adept at outlining intricate religions and myths. This promises to be a truly epic fantasy.