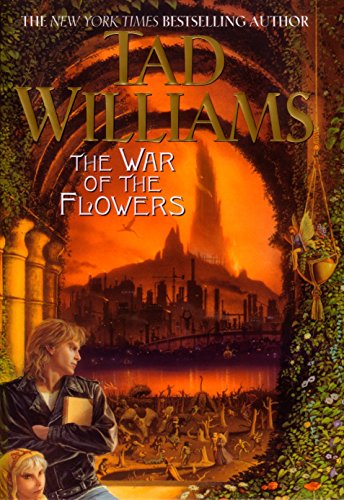 THE WAR OF THE FLOWERS

Travel into another dimension is a popular fantasy ploy, but rarely accomplished with such humor, terror and even logic as in this stand-alone by bestseller Williams (, etc.). After losing his girlfriend, Theo Vilmos, a singer in a humdrum northern California rock band, finds in his late mother's remote cabin an amazing if incomplete manuscript left by his eccentric great-uncle, Eamonn Dowd, about a fairy world purportedly visited by its author. Unsurprisingly, Faerie turns out to be a real place. Applecore, a short-tempered, red-haired sprite, abruptly appears before Theo just as a horrifying monster starts banging on the door. At Applecore's command, Theo swoops her up and pops through "the Gate" into a magical realm that proves initially beguiling, later strange and finally deadly. Ironically, Faerie is a distorted image of our own world, ruled by cruel fairy tyrants. The powerful classes, each named for a flower, wage war against each other, using colossal dragons as the equivalents of nuclear bombs. Theo discovers love as well as unsuspected secrets of his own birth and family. Williams's imagination is boundless, and if this big book could have been shorter, it could just as easily have been longer. The incorrigible Applecore continually delights, as in her comment on a famous J.M. Barrie character: " 'If you believe in fairies, clap your hands'? If you believe in fairies, kiss my rosy pink arse is more like it."