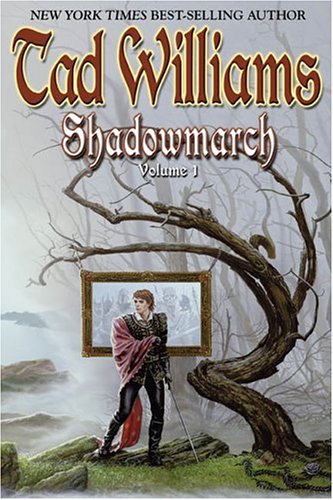 In the impressive opening installment of his first new high fantasy trilogy in a decade, Williams (the Memory, Sorrow and Thorn trilogy) injects hope and humor into an end-of-the-world conflict that pits "the strange, pagan Qar," a race of fairy folk, against the humans who forced them behind the Shadowline (the line of demarcation between the Qar and the human lands) and claimed their ancient stronghold of Southmarch (aka Shadowmarch) on the continent of Eion. The March kingdoms, whose ruler, King Olin, is held captive by the empire of Hierosol's Lord Drakava, are in turmoil after the assassination of Prince Regent Kendrick, whose twin siblings, Briony and Barrick, must struggle to keep their domain together. Soon after the fairy war begins, the Qar dump a mysterious boy beyond the Shadowline, where he's discovered by Chertz Blue Quartz, a little "Funderling," whose stone-working people live beneath Southmarch. Packed with intriguing plot twists, this surreal fantasy takes the reader on a thrill ride from a haunted wood where madness dwells and the sun never rises, to drafty castles and adventures deep underground. Much of the imagery seems inspired by Arthur Rackham with a hint of Edvard Munch. The author's richly detailed world will enchant established fans and win new converts.

The War of the Flowers