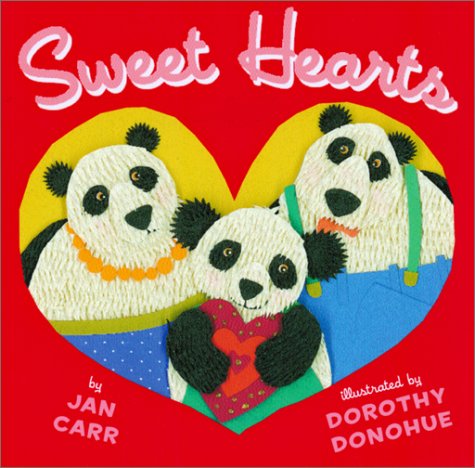 Carr's (, ) bouncy, rhymed verse and newcomer Donohue's neon-bright collages combine to create a mild guessing game. A toddler panda makes and hides Valentines for his family. He scrunches underneath the bathtub concealing "one heart in a shoe," and earnestly hides homemade Valentines for all the people he loves, even sending "one heart in an envelope" to Grandma far away. The toddler believes that he will surprise everyone, but readers can plainly see his parents watching from behind doors as he scatters his love notes everywhere. Cunning foil-trimmed hearts decorate checkerboard endpapers, while a foreword provides a historical context for the holiday and an afterword lists clear instructions for "How to Make Hearts." Donohue's pandas resemble three-dimensional, tissue-paper party ornaments, but their uniformly worried, toy animal eyes and staid expressions sometimes lack warmth. As the toddler fools his parents, and his parents fool him at the same time, by pretending to be fooled themselves, the complexity and secrecy multiply. Youngest readers may not fully understand the intended humor, but they likely will get the heartfelt message. Ages 2-6.