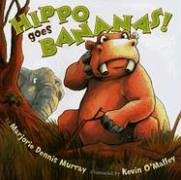 Hippo has a toothache and he's not taking it well: "He grumped and bellowed—spun in circles—and crashed into a tree." And since no other animal in the plains knows what's wrong, the rumor mill shifts into high gear, and soon all the inhabitants are adding their own speculations as to what's going on: "Hippo's gone bananas!... He's knocking down every tree in the jungle, kicking them off the cliff, rolling them into the river, damming up the water, and flooding the Serengeti." O'Malley's ( ) high-octane marker and colored pencil drawings expertly build the mounting chaos, which erupts into a stampede. The critters decide there's only one way to stop the madness: push Hippo off a cliff. But not to worry: he not only lands safely, but also loses his troublesome tooth. Although the story may be familiar, it should make for a rewarding read-aloud; Murray ( ) builds some effective verbal comedy through repetition, and peppers it with some fun, animal-centric exclamations (e.g., "Leaping Lemurs!"). Most importantly, the book gets a good goose from O'Malley's artwork. His beefy, energetic renderings and extensive repertoire of over-the-top animal expressions should be good for a few cascades of giggles. Ages 3-8.