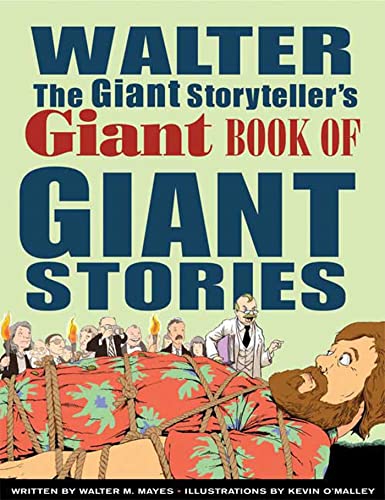 A survivor of shipwreck, the gargantuan red-bearded narrator of this entertaining collection of stories within a story (who will be immediately recognizable to those who have met the author, making his children's book debut) wakens to find himself bound, Gulliver-style, by Lilliputian-like island inhabitants. Their leader, Magnus, orders the large captive "to stand trial for the crimes of giants." A debate ensues about the true nature of giants: Magnus recalls legends of heroes destroying the likes of Goliath and Huwawa, while the narrator counters with references to "kindhearted, heroic giants." The narrator's defense consists of a series of tales beginning with Jack and the Beanstalk; from the giant's perspective, "this was a home invasion and Jack was a punk!" He calls Paul Bunyan as witness to tell of Stormalong, who helped the Americans win the War of 1812, and also cites Finn M'Cool, "the greatest hero fair Ireland ever produced," who drafted eight "Small Men" with unique talents to help him rescue a king's progeny. The tales cover a range of geographical and cultural territory, and O'Malley's ( ) illustrations vary accordingly. Both art and text in the framing story, which has a comic book feel, tend to be less focused than in the tales that it contains. Oval pen-and-ink crosshatch drawings set against gray watercolor washes illustrate Stormalong's tale; in Atlas's story, the angular figures resemble that of Grecian urns. While some readers may find the pages' variety and busy-ness distracting, others will enjoy this good-natured offering. Ages 6-10.