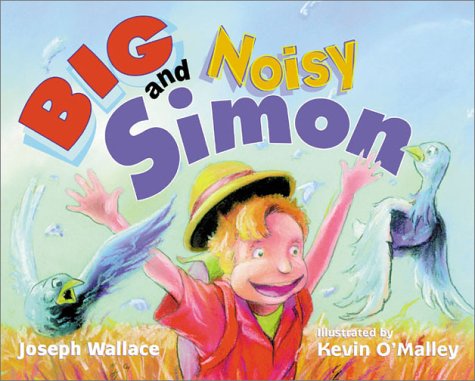 Simon, the hero of Wallace's () gracefully told story, tries to overcome his rambunctious nature: "He was as noisy as he was big, and that made him very noisy." On a summer trip to Africa with his parents, who are wildlife photographers, Simon tries to keep quiet, especially on the photo shoots, but he just cannot manage. Excluded from a shoot, Simon is miserable: "Now he knew that he wasn't just bigger and noisier than anyone else in his class, but in all of Africa, too." Fortunately, a herd of elephants—big, noisy elephants—fill him with confidence and, surprisingly, inspire him to be quieter as well, when he sees them moving silently at night. He carries the lesson home, where sometimes, just as he's "about to be big and noisy," he remembers the elephants. "He'd pretend he was walking across the dark savanna, and the only sound was the grass whispering against his smooth gray sides." O'Malley's () puckish illustrations capture Simon in all his overeager glory: his mouth stretches hugely across his face, his body seems either in motion or rigid with the effort to be still. Two particularly fine vistas—one of the elephants at night and one of Simon seated on a vast, twilit savanna—evoke the composure Simon aspires to, showing both the protagonist's and the illustrator's more thoughtful sides. Ages 4-7.