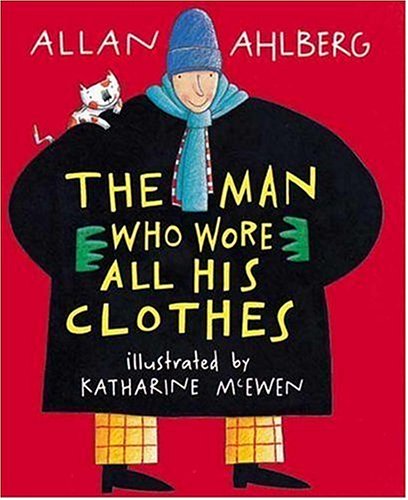 THE MAN WHO WORE ALL HIS CLOTHES

An appealingly madcap plot, dialogue that verges on slapstick and sprightly pictures keep this early chapter book rolling along at a snappy clip. Ahlberg () introduces Mr. and Mrs. Gaskitt and their nine-year-old twins, Gus and Gloria. One December morning, Mr. Gaskitt gets dressed, donning multiple layers of clothing: "He put on his tee shirt and underwear and socks, and his socks and tee shirt and underwear, and his underwear and socks and tee shirt." While he drives off in his car to an undisclosed location, Mrs. Gaskitt zooms off in her taxi to pick up a passenger whom kids will immediately recognize as a bank robber. The culprit eventually flees the taxi and boards a school bus carrying Gus and Gloria and their classmates, precipitating a farcical chase scene involving the bus, both Gaskitt parents' vehicles, a police car and the van of a camera-toting news reporter. Ahlberg adds to the mayhem with some absurd asides: the radio in Mr. Gaskitt's car bungles the news reports and the twins' teacher barks such instructions as "Fingers on lips! Elbows on knees!" McEwen's () watercolor and crayon art comically captures the lighthearted tone of the tale, topped off by the revelation of the well-padded pater's profession: playing Santa. This is good silly fun. Ages 7-9.