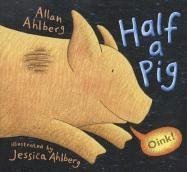 Jessica Ahlberg makes a high-spirited debut in this higgledy-piggledy book written by her father, who collaborated with his late wife on and many other titles. Rendered in watercolor, colored pencil and ink, her pictures call to mind the simple line and soft pastel shadings of her mother's artwork. The pictures easily match the frivolity of Allan Ahlberg's ( , reviewed above) plot as it chronicles the dark developments that befall Esmeralda the pig and her divorced owners, kind Mrs Harbottle and her nasty ex-husband. Mr Harbottle ("a horrid man with uncombed hair and dirty fingernails" who had consumed so many sausages "that really he looked like a sausage") hires some hoodlums to kidnap the pig (and readers have no doubt as to the pig's intended fate). The artist shows her kidnappers mapping out scenarios for the best way to separate the pig into equal halves (one drawing shows a butcher's map of pork cuts; another depicts the pig literally separated in two). But the pig escapes, precipitating a zany chase scenario involving the two men and two children who live next door to Mrs Harbottle. The author uncharacteristically prefaces his tale with a chatty introduction spotlighting all the "good words" that readers will encounter in the ensuing pages, and somewhat intrusively interjects them into his narrative, with asides and footnotes. Still this farcical, curlicue tale is bound to elicit some squeals of glee from youngsters. Ages 5-8.