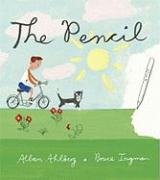 Both clever and suspenseful, this surefire delight tells the story of a pencil who must deal with the consequences of his inventions. The pencil begins by drawing a boy (Banjo from Ahlberg and Ingman's ), a dog and a cat—and their world soon expands dramatically (and colorfully, thanks to Kitty, a paintbrush the pencil creates). Complaints start to surface (“ 'I shouldn't be ,' said a grandpa”), but the pencil's solution—an eraser—runs rampant and tries to rub out everything, including the pencil. Ingman exuberantly conveys the joy of both construction and destruction—in one scene, animals and people flee on foot, bicycle and skateboard as the eraser wipes away the spare, yellow background. The book's comical, unexpected plot and wry narrator keep the story fresh throughout—a running joke involves each of the pencil's creations insisting on a name; those the pencil provides are largely nonsensical (the endpapers are filled with additional items—a bike named Augusta, a cuckoo clock named William). Tranquility reigns by book's end, but young readers are sure to be absorbed in finding out what happens next as the pencil draws his way out of one predicament after another. Ages 4–8.