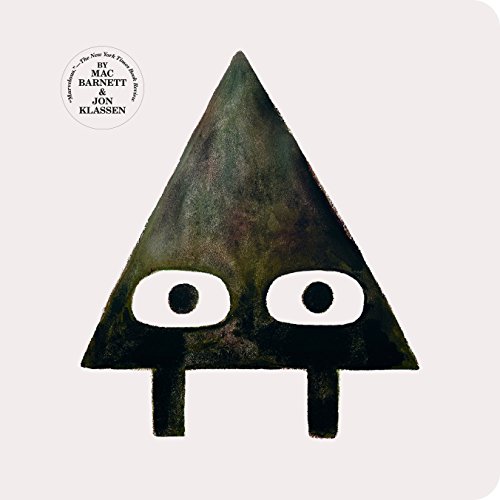 In the first book of a planned trilogy from the team behind two Caldecott Honor winners (Extra Yarn and Sam and Dave Dig a Hole), Triangle plots some serious mischief. He’s a charcoal-colored triangle with sticklike legs and Klassen’s famous shifty-eyed stare, and he plans to frighten his friend Square. Triangle sets off through the triangles in his neighborhood, across a wilderness of rocky mounds (“They were shapes with no names,” Barnett intones) and on through a lot of squares to Square’s house. “I will play my sneaky trick,” Triangle announces. He hisses like a snake, Square is terrified, and there’s a moment of silent, incandescent fury as Square glares at Triangle across the page. Square chases Triangle home and blocks his door, leaving Triangle in the dark, which frightens him right back. “You see, Triangle,” Square crows, “this was my plan all along.” Barnett ends with a rhetorical question for readers: “But do you really believe him?” Since the final spread shows Square stuck fast in the triangular doorway, the answer, clearly, is a resounding “No!” Klassen’s palette is quiet, his weathered backdrops are elegant, and his comic timing is precisely synched to Barnett’s deadpan prose. Triangle fools Square, and the story fools readers, too, as they wait for Square to put Triangle in his place, or for the two to reconcile. Instead, Triangle seems to win this round, even if he does finish the book trapped in his own home. Whereas the humor in Sam and Dave Dig a Hole was subtle and sly, this shape showdown is pure, antic buffoonery. Ages 5–9. Agent: Steven Malk, Writers House. (Mar.)
close
Details