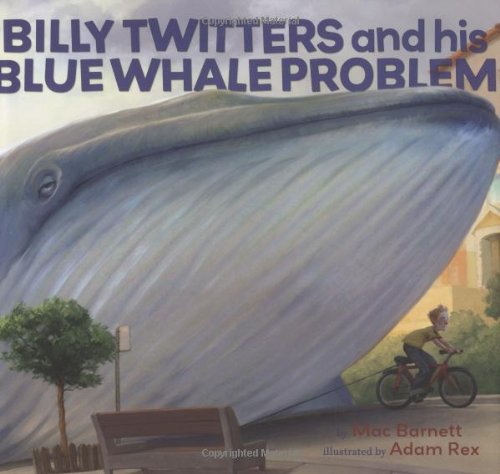 When his parents threaten to teach him responsibility by giving him a whale, Billy Twitters isn’t worried: “It’s not like you can just have one delivered to your house overnight.” But he’s wrong. Rex’s ( ) howler of a double-page spread shows an enormous trailer attached to a “FedUp” truck, an equally massive blue whale suspended from tow straps. Rex’s magazine–style artwork—realistic enough to drive home the humor and full of clever touches—is the perfect choice for Barnett’s high-concept debut. Billy hauls the whale to school behind his bike, a skateboard under the creature for easier sliding; confronts the school bully and the school geek (new allies, in league against him); and struggles with blue whale upkeep, like collecting 10,000 gallons of seawater at mealtime (“Try the ocean, son,” his father suggests). Billy never names his whale—it’s more of a burden than a pet. The abrupt ending disappoints somewhat, given the uproarious pages that precede it (the contributors also work in scientific information about blue whales—though readers, between laughs, may not notice). Still, tons of fun. Ages 3–7.