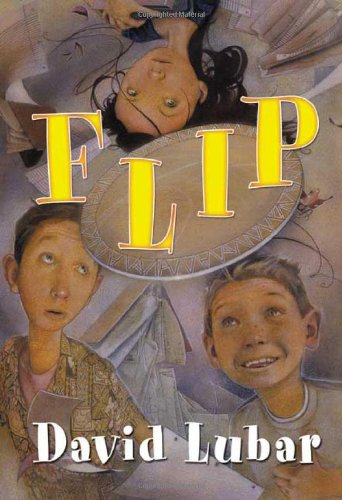 The Nexulans are intergalactic content creators, the Hollywood moguls of the universe. One of their most popular products is a series of small discs that, when activated, allow the user to "experience great moments in the life of a legend" in Earth's history. When a Nexulan ship crashes, some of the discs land near a middle school—where twin eighth-graders Ryan and Taylor McKenzie discover them. Ready-for-anything Ryan jumps at the chance to use the discs, while his straight-laced, A+-average sister wants to turn them over to the authorities. Ryan is the first to figure out how they work: after a quick flip, he absorbs the disc into his palm, and he literally becomes the hero whose life it chronicles. Suddenly the boy who was last in sports, failing in school and a constant disappointment to his parents finds himself in the minds of such historic figures as Babe Ruth, Einstein and Gandhi. Lubar's prose may not be as lean here as in , but the extremely short chapters and cinematic point-of-view shifts keep the pages flipping quickly. The author makes both main characters equally compelling: Taylor excels at everything, but has deep sympathy for her brother's weaknesses; Ryan is all too aware of those weaknesses and wrestles with how to overcome them. Thus a spaceship dropping magical artifacts to Earth becomes secondary to a complex, believable character study. A savvy drug metaphor also lies beneath it all: Ryan's near-reliance on the reality-escaping discs (he even fashions rules that will ring familiar to addicts of all stripes—never too early in the morning, never before a big test, etc.) is narrowly trumped by the redeeming insight that he doesn't need them to be someone who matters. A multi-level tale, well told. Ages 9-12.