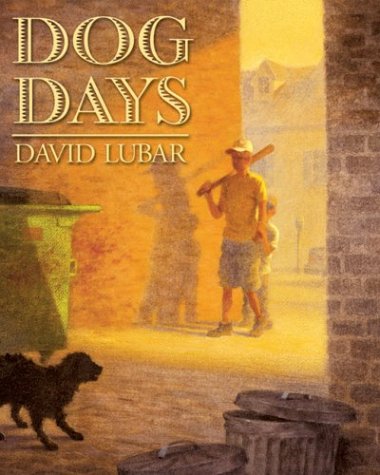 As Lubar's ( ) brief, disappointing tale of one boy's summer begins, outfielder Larry misses a catch to make the game-ending third out—because his six-year-old brother calls to him, "Someone needs help." Paul leads Larry to an alley where a mysterious red stain covers the wall, and a growling stray appears to be guarding the spot. "Besides baseball, there wasn't anything in the world [Larry] liked as much as dogs." And dogs love Larry, who takes in many a stray until he can find them homes, so he can't understand the alley dog's reaction. The protagonist becomes intrigued when new red stains start appearing on the wall and the dog continues to growl at him emphatically. While unraveling the puzzle, Larry discovers a way to tackle his two biggest problems, rising dog food prices for his homeless brood and losing the paper route he'd been promised. The tale feels sketchy, compared with Lubar's previous novels. Even the relationship between Larry and Paul, the only characters with any development here, seems unrealistic. Readers might believe that Paul would interrupt Larry at a pivotal moment on the field once, but twice (while Larry's at bat with a full count and the perfect pitch is about to come over the plate)? And his friends never comment on Larry's sabotage of their games. Fans of baseball and dogs will likely feel that they don't get to see enough of either to hold their interest. Ages 9-14.