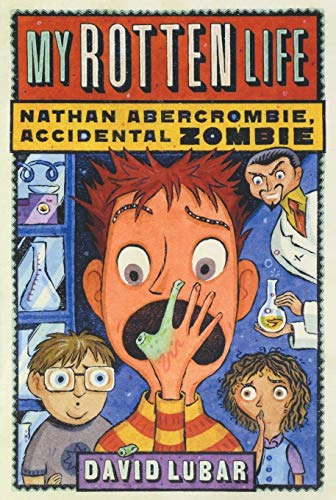 In the first book in the Nathan Abercrombie, Accidental Zombie series, fifth-grader Nathan knows what it's like to be an outcast: he sits at the Second Besters table at school with kids who “score somewhere around minus two on a popularity scale of one to ten.” Then, he is doused with “Hurt-Be-Gone, the world's first all-natural, totally safe emotion killer,” which turns him into an almost-zombie. Unable to sleep or feel pain, Nathan masters the toughest video game on the market and leads his school to a track meet victory by doing hundreds of pull-ups. Lubar ( ) entertains with a “Wouldn't it be cool if...” kind of story that kids often try to write and especially love to read. Gross-out moments abound, such as when Nathan gets a fork stuck in his nose and later watches as his thumb pops off and is almost eaten by a dog. The over-the-top narrative will appeal to readers who like their humor twisted, and might even have some wishing that they, too, could be a half-dead zombie. Maybe. Ages 8–12.