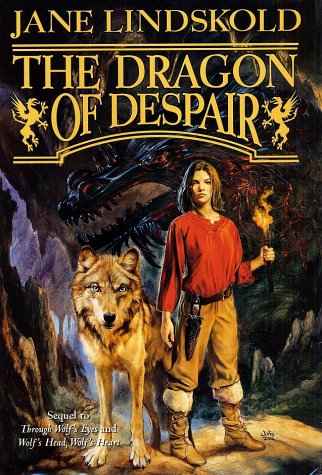 THE DRAGON OF DESPAIR

In Lindskold's exciting third installment of her wolf-girl fantasy saga (after 2002's ), Firekeeper finds herself deeply entangled in the politics and intrigues of her high-born human relations and even more so in the fight for survival of her alternate family, the Royal Beasts of the forest. (Despite the title, the action has little to do with dragons.) Malevolent sorceress Lady Melina Shield has wed New Kelvin's version of a king and become his "Consolor." Hawk Haven's King Tedric wants to know exactly what Melina is up to, and the only way he can discover her plans is by sending an expedition to New Kelvin, ostensibly as a trade delegation. If that isn't enough to worry about, unauthorized settlers have encroached on the territory of the Royal Beasts, forcing them (and therefore Firekeeper, as a member of the pack) to declare themselves ready for war against humans. Since Firekeeper is, as it were, neither fish nor fowl, she finds her loyalties divided in a most uncomfortable situation. While the feisty Firekeeper plays a subordinate role here, the author provides lots of engrossing lore about pack behavior and feral animals. Fans can look forward to more of Firekeeper's unique perspective in the fourth book, the start of a new sequence, .