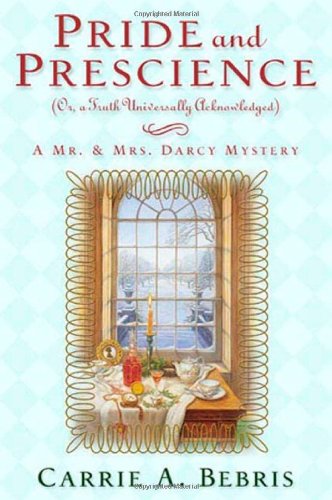 PRIDE AND PRESCIENCE: Or, a Truth Universally Acknowledged: A Mr. and Mrs. Darcy Mystery

In her well-crafted mystery debut, fantasy author Bebris ( , etc.) picks up the action where Jane Austen's left off—on the wedding day of Elizabeth Bennett and Fitzwilliam Darcy, who marry in a double ceremony with Elizabeth's older sister Jane and Charles Bingley. The Bennett brides are soon upstaged by Bingley's sister, Caroline, who announces her engagement to a Louisiana planter. Caroline's imminent nuptials mean the Darcys must remain in London, where an evening party leads to a meeting with an archeology professor who specializes in the indigenous culture of North America. Newlyweds Mr. and Mrs. Darcy later travel to Netherfield, as does the professor, who brings along some "curiosities" he's collected that he credits with unusual powers. A series of improbable events ensues, leaving one murdered house guest and two sedated hosts. Can the American artifacts hold the key to the bizarre occurrences? When an unexpected blizzard cuts the house off from the rest of the neighborhood, it's up to Mr. and Mrs. Darcy to unmask the killer and restore everyone's peace of mind. Despite an anachronism or two (e.g., summoning a constable rather than the local magistrate), the author provides convincing portraits of life in London and at Netherfield. With a touch of sorcery and lots of red herrings, Bebris works her own brand of Austen magic, whetting the reader's appetite for a sequel.

Jane and the Ghosts of Netley