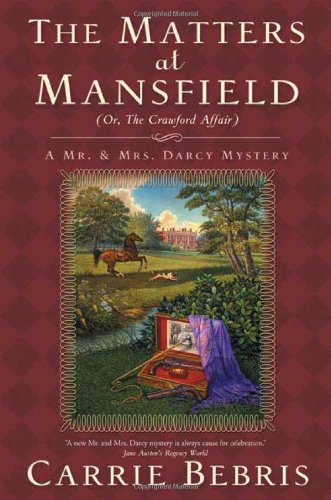 The Matters at Mansfield (or, The Crawford Affair): A Mr. & Mrs. Darcy Mystery

Bebris's fourth Mr. & Mrs. Darcy mystery is less true to the spirit of Jane Austen than its predecessor, (2006). Soon after the birth of their first child, Elizabeth and Darcy visit Mansfield Park, where they get caught up in intrigue involving mistaken identities and sudden disappearances more suited to a bedroom farce than anything in the Austen canon. Taken as a Regency romp, the story has much to recommend it—a lively plot, engaging characters and a surprising finale. Some of Austen's characters are cast in a different light than they appear in their original incarnations: Anne de Bourgh and Colonel Fitzwilliam benefit, while others become caricatures of themselves. As usual, Bebris slips in esoteric information on such matters as the code of honor and dueling without slowing the pace.