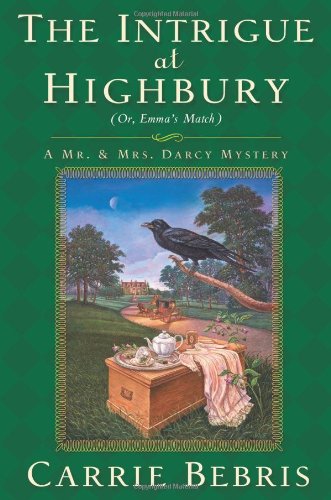 The Intrigue at Highbury: Or, Emma’s Match: A Mr. & Mrs Darcy Mystery

At the start of Bebris’s agreeable fifth Mr. & Mrs. Darcy mystery (after 2008’s ), the couple are on their way to visit cousins of Darcy’s in Sussex when outside the Surrey village of Highbury they stop to assist a young woman in distress. When Elizabeth and Darcy get back in their coach, they discover some valuable heirlooms missing. Meanwhile, “Miss Jones” has vanished. They inform the nearest magistrate, Mr. Knightley, whose wife, Emma, has just hosted a party where a guest has died. Elizabeth and Emma take an active role by interviewing local residents about the theft and the death, while the gentlemen play smaller parts further afield in Surrey and London. Close questioning and careful thought, rather than magic as in earlier books, help solve the Highbury conundrums. The main characters behave more like Austen’s originals than they did in , helping make this perhaps the most faithful sequel to Austen in this beguiling series.