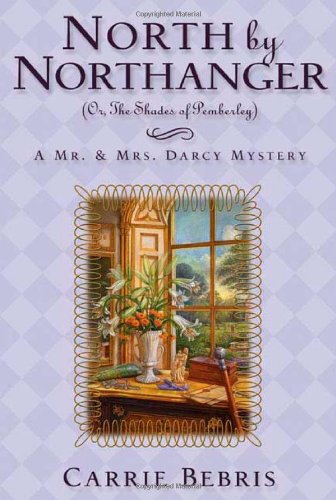 North by Northanger (Or, The Shades of Pemberley):A Mr. and Mrs. Darcy Mystery

Bebris provides another feast for Janeites in her third Mr. and Mrs. Darcy mystery (after 2005's ). Elizabeth and Fitzwilliam, about a year into their marriage, stop off at Northanger Abbey on their way from Bath to Pemberley, at the invitation of Captain Tilney. There the couple find a poorly managed house and their good-natured host swathed in bandages. After a brief visit, they've scarcely resumed their journey when a Gloucestershire constable arrests them on the charge of stealing a diamond set belonging to the late Mrs. Tilney, the captain's mother. A note written by Darcy's mother 18 years earlier hinting at a lost family heirloom and Elizabeth's "condition" further complicate this well-told tale. Austen's fans will be happy to see the reappearance of not only the Bennet family but also Lady Catherine de Burgh. For film buffs, there's an echo of Hitchcock's thriller, though the crags of the Peak District must stand in for Mount Rushmore.