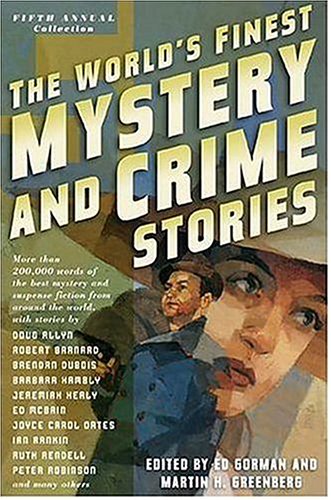 Gorman and Greenberg's hefty and satisfyingly diverse anthology gathers 32 crime stories first published in 2003, along with six succinct introductory surveys of the mystery scene for that year. The opener, Kathyrn Rusch's low-key yet arresting "Cowboy Grace Kristine," tells of a wallflower who leaves town to make a new life, only to be tracked down for a crime she didn't know she was involved with. Anthony Mann's hilarious "Esther Gordon Framlingham" sends up the genre, as a writer desperately attempts to sell his agent on a new mystery series concept, offering, among other ideas for a hero, "A dominant Neanderthal male at the time of the Cro-Magnon." The agent responds: "Marlene Trent's Ug Oglog novels. You mean to say you don't know them?" Other stories range from Elizabeth Foxwell's gritty "No Man's Land," set in the female ambulance corps in WWI, and David Edgerly Gates's western thriller "Aces & Eights," to Liza Cody's postmodern "Woke Up This Morning." A few tales are less compelling, such as Edward Hoch's "The Face of Ali Baba," in which the hunt for an Osama bin Laden figure uses trivial clues from the . Veteran crime writers Jeremiah Healy, Joyce Carol Oates, Sharyn McCrumb, Clark Howard and John Lutz also highlight this impressive new addition to the series.