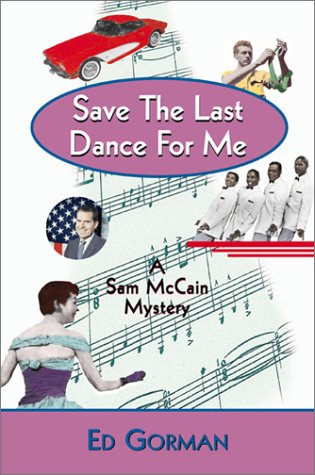 SAVE THE LAST DANCE FOR ME: A Sam McCain Mystery

Shamus-winner Gorman's fourth nostalgia-ridden Sam McCain novel (after), set in Black River Falls, Iowa (pop. 27,300), during the summer of 1960, has to rank as one of the more good-natured mysteries in memory. His wouldn't-hurt-a-fly but much abused hero, a part-time lawyer and part-time PI, gets hired by the town judge to investigate the murder of John Muldaur, a local fundamentalist preacher who used live rattlesnakes to test the "purity" of his flock, after someone doses the preacher's bottle of Pepsi with strychnine. When he wasn't sleeping with the wife of one of his congregation, Muldaur was conducting a vigorous campaign to expose the conspiracy of Zionists and Roman Catholics to take over the world. Gorman has a lot of fun at the expense of his half-witted bigots. McCain's orders are to find Muldaur's killer before the arrival of presidential candidate Richard Nixon, who's on a campaign tour and due to deliver a speech in Black River Falls. A stupid sheriff and the fanatical hillbillies who revere Muldaur's name don't make McCain's task any easier. Gorman delivers an intelligent and plausible solution to the crime, while the killer proves to be an unexpected but logical choice good for a goose bump or two. If the book's a bit thin on substance, it's a fast read with the best cast of comical country characters this side of Dogpatch.