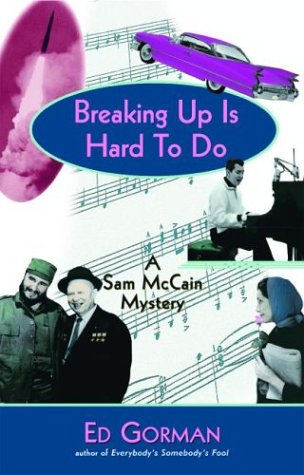 BREAKING UP IS HARD TO DO

The sixth Sam McCain novel from Shamus-winner Gorman ( , etc.) trades on Cold War fears and the repercussions from the political and social issues of a bygone era. It's late October 1962, the height of the Cuban Missile Crisis, and the townsfolk of Black River Falls, Iowa, are huddled in churches waiting for nuclear annihilation. When gubernatorial candidate Ross Murdoch pays McCain to look over his bomb shelter, McCain discovers the body of a recently murdered young woman, Karen Hastings. The four suspects in the killing are all prosperous, well-respected locals who had been sexually involved with the dead woman. As if this weren't enough, two of McCain's past loves are undergoing simultaneous divorces. The mystery plot is less engrossing, however, than the period Gorman evokes in such Proustian detail: a soda fountain with "the old ice cream chairs and the crooked paperback rack that squeaked when you turned it around"; the exact look, feel and circumference of a bomb shelter; and, best of all, "the ancient Rialto theater" regularly showing the works of the "holy trinity" of Gene Autry, Roy Rogers and Hopalong Cassidy. It's a fast, entertaining read, but when it's over, all that's left is a reservoir of good feelings and pervasive nostalgia for a time that may strike many readers as positively idyllic from today's perspective.