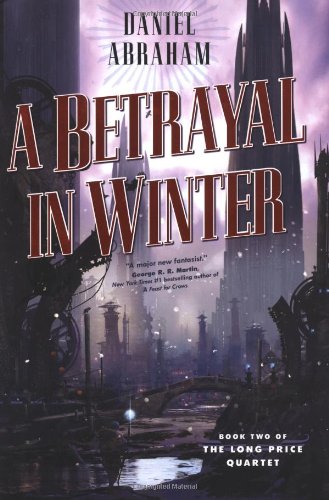 A Betrayal in Winter: Book Two of the Long Price Quartet

Set 15 years after the events of 2006’s , Abraham’s clever second novel follows the tribulations of Otah Machi, the sixth son of the Khai Machi. On the demise of the Khai, one son must dispose of all other contenders in order to become the new ruler. Exiled years ago for refusing to become a magic-wielding poet, Otah made his home far from Machi, changed his name to Itani, worked as a laborer and never interfered in affairs of state, hoping to escape the kill-or-be-killed tradition. Now the old Khai’s death approaches, and Otah’s oldest brother, Biitrah, has been smothered in his sleep. Whispered rumor—which may have been started by the Galts, an empire desperate to destroy the house of Machi—puts the blame for the murder on Otah. He returns to Machi, grimly acknowledging that he must kill his brothers to save himself. Mystery, love triangles and struggles with magical creatures called andat make for a slow-starting but well-rounded story. ( )