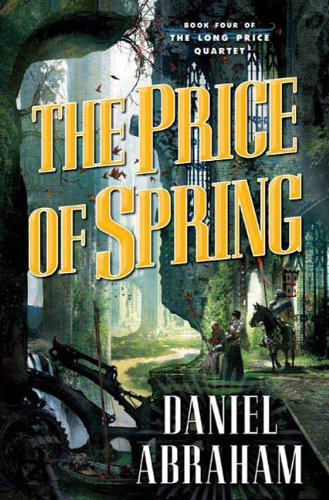 The Price of Spring

“Nothing ever goes the way I plan,” laments Otah, long-suffering emperor of the Khaiem, concisely summarizing Abraham's melancholy and near-perfect conclusion to the Long Price Quartet. Fifteen years after the disaster that led to the sterilization of all Khaiem women and Galtish men in 2008's , Otah seeks an alliance between the two long-warring nations in hopes of there being a next generation, while former poet Maati tries to teach young women to summon andat, beings that embody and control concepts. Maati's student Vanjit harnesses the andat Clarity-of-Sight, but war trauma transforms her from possible savior into deranged dictator. Abraham shies away from the blood and swashbuckling of the previous novels, instead telling a tale of forgiveness and catharsis that concludes this complex saga with mixed notes of sadness and hope.