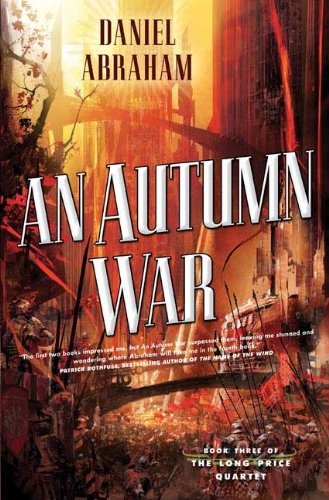 An Autumn War: Book Three of the Long Price Quartet

In the sharp and powerful third Long Price novel (following 2007's ), Abraham continues to explore the implications of his fantasy world, in which powerful elementals called andat are enslaved by poets to work for the city-states of the Khaiem. The ongoing struggles of familiar, aging characters—poet Maati, his ex-lover Liat, the mercenary Sinja, and Otah, now the reluctant ruler of his Khaiem city—occupy much of the story, but a new voice drives the plot. Gen. Balasar Gice, of the rival Galt Empire, is convinced that the andat are a threat to mankind and wants to eliminate them for good. As Gice's plan comes to fruition, everyone must confront changes in their world that go beyond anything they'd ever imagined. New readers will find Abraham's deft storytelling style accessible, but returning fans will most appreciate the growth of the world and the characters.