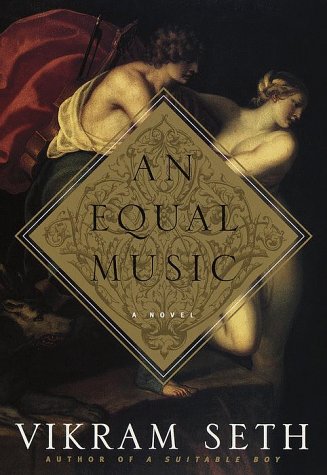 Seth finds his true voice in this lyrical, ravishing tale of star-crossed lovers--an English violinist and the pianist he desperately pursues. Unlike his previous work, A Suitable Boy (a 1349-page family melodrama set in 1950s India and self-consciously modeled on the social novels of Dickens, Trollope and Eliot), this novel is tightly controlled, original in design, awash in the music--and spirit--of Mozart, Beethoven, Schubert, Haydn, Brahms and Bach. Even readers not familiar with specific pieces of Western classical music will be caught up in the contemporary love story, set mainly in London and Vienna with excursions to Venice and northern England. Michael Holme, brooding member of an English string quartet, endlessly adrift a decade after breaking up with pianist Julia McNicholl, suddenly bumps into her again in London. They resume their affair--with guilty reluctance on her part, as she's married to an American banker and has a son, but with reckless abandon by Michael, who betrays and then ditches his girlfriend, a needy French violin student 15 years his junior. Beyond mere erotic duplicities, a far more tragic obstacle emerges--Julia is rapidly going deaf. Music, her lifeblood, is slipping away from her, a secret she keeps from her fellow musicians until Michael clumsily reveals it. Around this simple plot, Seth weaves an exploration of the creative process as he delves into the quartet members' quirks and neuroses, their romances, states of exaltation, their synchronous vision. All the rehearsals, shoptalk, fiddling and ruminations blunt the impact of Julia's tragedy and the love story's momentum, but Seth's musical, quicksilver prose keeps the narrative aloft. It's a classy novel, told with keen intelligence and sensitivity, embodying a brave attempt to fathom the world of deafness as well as the high-strung milieu of performing artists. $150,000 ad/promo; author tour; simultaneous audio; rights sold in Denmark, France, Germany, India, Canada, Italy, the Netherlands, Norway, Spain, Sweden and the U.K. (May)
close
Details