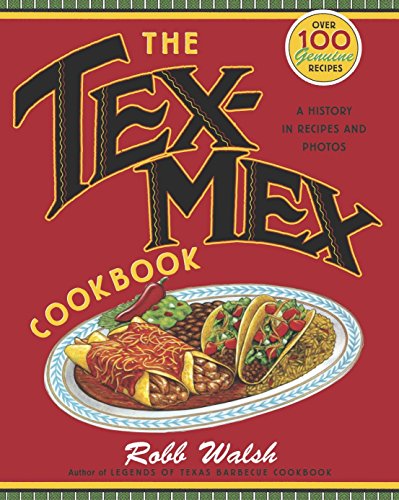 THE TEX-MEX COOKBOOK: A History in Recipes and Photos

Walsh, the 's restaurant critic, lifts the veil on the often misunderstood, widely undefined concept of authentic Tex-Mex, providing the nuts and bolts of one of America's finest—and oldest—indigenous cuisines. While Tex-Mex is loosely described as a fusion of Texan and Mexican cuisines, Walsh sheds a much needed light on the intricacies of the food he calls "that loveable ugly duckling." He outlines Tex-Mex's main ingredients (chile peppers, lard and cornhusks), and along the way not only gives the history behind the proliferation of Mexican ingredients into American cuisine, but unapologetically rationalizes the need for unrefined staples such as Velveeta cheese and Fritos corn chips in customary Tex-Mex recipes. Walsh fills the pages with stick-to-your-ribs fare like chili-slathered Truck Stop Enchiladas and Chili Mac (spaghetti and chili con carne), along with basics like Ninfa's Showcase Fajitas and Frozen Margaritas. As the chapters progress, Walsh builds upon earlier dishes, offering alternatives and tips. Sidebars and vintage photographs lend a personal feel, transforming this cookbook from a mere reference guide to an inviting memoir and social history of a food most Americans forget is unique to their homeland. Walsh deserves credit for taking on the difficult task of organizing the desires, beliefs and strife of the people who made Tex-Mex the respected cuisine it is today. Photos.