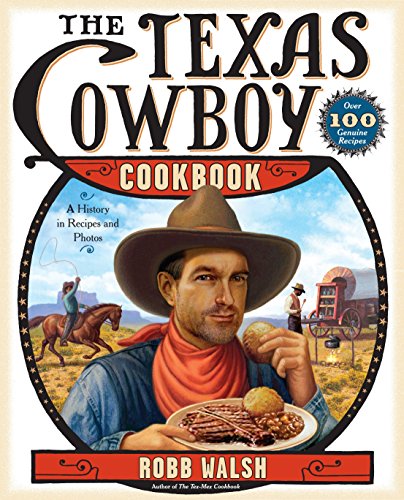 The Texas Cowboy Cookbook: A History in Recipes and Photos

A Houston native with two James Beard awards, Walsh ( ) carves Texas up into digestible sections, collecting its juices and leaving lots of contemplative fat. This 10-chapter history reaches as far back as the year 1540, when cattle first came to the area, and examines a multitude of geographic and demographic influences on the Lone Star State's cuisine. It is both a study of rich diversity and a collection of over 100 recipes, though only perhaps a quarter of the meals rise above the commonplace. The liveliest dishes turn up in the section on South Texas and are presented with a Hispanic flair, such as Conejo Colorado (Rabbit Stewed in Red Chile Sauce). There are two intriguing chapters that examine how black slaves transformed into black cowboys and were responsible for the introduction of Texas barbecue, but the accompanying recipes are disappointingly old hat. A fun chapter on Cowgirls in the Kitchen has some of the best of the book's 150 b&w photos as well as a swell Buttermilk-Lemon Pie. Moving into modern times, there is perhaps too much attention paid to the movie and the cultural and epicurean importance of Mickey Gilley, but Walsh wraps up his enterprise nicely with entrees such as a Poblano Mac & Cheese and a broiled tenderloin marinated in the black gold of Waco: Dr. Pepper.