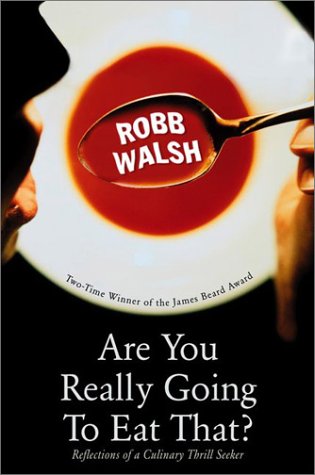 ARE YOU REALLY GOING TO EAT THAT?: Reflections of a Culinary Thrill Seeker

For Walsh (; ) the world is a never-ending odyssey of amusing and salivating gastronomical adventures, and he proves this with 40 articles and 20 recipes collected here. He travels to the Blue Mountain range of Jamaica to down a cup of some of the world's finest coffee; to Monterrey, Mexico, to devour (kid goat); to Thailand, where he bravely endures the rancid odor of a fruit called durian (dubbed by the Dutch) to sample its sweet and creamy flavor; and to the southern edge of Chile to taste the peasant seafood stew that inspired Pablo Neruda's poem "Ode to a Caldillo de Congrio." As much as he writes about flavors and tastes, Walsh writes about people, uncovering their culture and history through their foods. And like the enlightened traveler that he is, he learns about himself. While enjoying the Day of the Dead holiday in Mexico, Walsh discovers that the festival isn't so much about the food— (bread of the dead) or the accompanying sauce, mole —as it is a day for Mexicans to celebrate a meal with their deceased family members. The story ends with Walsh planning his own Day of the Dead (altar), in which he will share a meal with his late father and his only son, who was stillborn. More than a book about food, this volume is a collection of cultural anthropology essays.