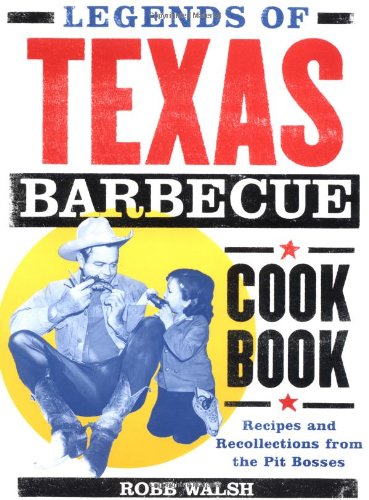 LEGENDS OF TEXAS BARBECUE: Recipes and Collections from Pit Bosses

Not every cookbook would include a recipe that begins, "Dig a pit 3-feet-deep, 4-feet-wide, and 40-feet-long." But this is Texas and, given 300 pounds of brisket, there is no more invigorating an experience than this kind of open pit barbecuing as championed by Walsh in his collection of barbecue memoirs, trivia and history. A newspaperman at heart, Walsh interviews the top pit bosses across the state and shares their secrets: Harley Goerlitz instructs beginners on a simple Pork Shoulder while Bubba Hodges offers Egypt Brisket with a mop sauce of vinegar, ranch dressing and Lone Star beer. For the politically astute, there are Barbecue Sauce offerings from both Lady Bird Johnson and Barbara Bush, not to mention Senator Lloyd Bentsen Highway Rice Salad, a democratic blend of Texmati rice, chopped vegetables, yogurt, pecans and cilantro. Most interesting is the exploration of cultural influences across the prairie, including a surprising look at the German and Czech political radicals who landed in Texas in the mid-1800s, and the smoked meats they brought with them. For those who prefer motoring to grilling, Walsh includes a fine list of barbecue joints all along the Barbecue Belt, as well as different meat markets and a calendar of some of the major cook-offs held throughout the state.