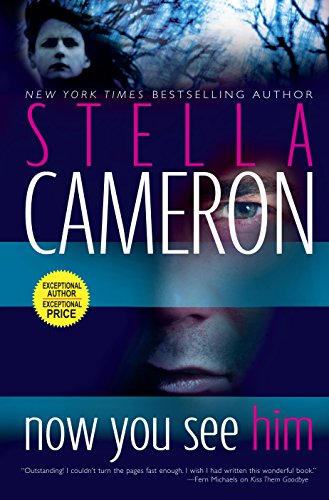 NOW YOU SEE HIM

Cameron returns to Toussaint, La., setting of the popular for another soft-boiled, sexy thriller in which a local author's murder mysteries come to bloody life. Convicted murderer Charles Penn has escaped prison and is on the loose. When he killed Stephanie Gray with an ice pick at Mardi Gras two years before, the only eyewitness to the killing was timid Ellie Byron, a bookstore owner and former homeless runaway with a troubled past. Though she was unable to positively identify Penn in a lineup, Ellie frets that she'll become his next target now that he's out. Then a woman is found stabbed to death with an ice pick at a New Orleans jewelry store, and friends rally around terrified Ellie, particularly lawyer Joe Gable, who is secretly in love with her. Meanwhile, the police decide that both killings are re-enactments of scenes from local author Sonja Elliot's bestselling crime novels. Penn is apprehended, but as Elliot's next novel, , is rushed into stores, Ellie is assaulted, and both she and Joe race to find the real killer in a tidy, spirited conclusion. While an avalanche of love-talk and hot sex stifles much of the narrative tension, those looking for spicy, melodramatic escapist fare will enjoy a heaping helping on every page.